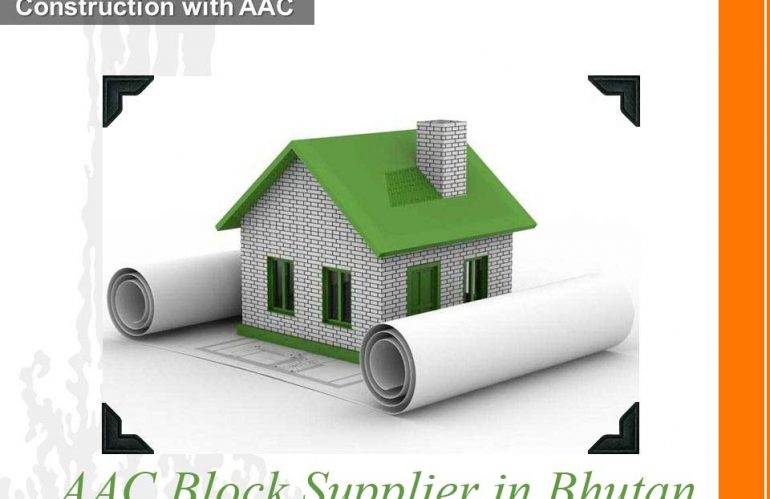 We are dealer & supplier of Building Construction Products in Bhutan and our product range are  AAC Block, uPVC. We also provide advice on sourcing construction material at a competitive rates.

We are currently supplying AAC at :

Best in class fire rating of 4 hours. The melting point of AAC is over 16000 c, more than twice the typical temperature in a building fire of 6500 c.

Pest Resistant with solid wall construction and finishes, there are fewer if any, cavities for insects and rodents to dwell in. Termites and ants do not eat or nest in AAC blocks. Being made up of inorganic mineral, AAC blocks do not promote growth of molds.

AAC Blocks can be sawed, drilled, just like wood, and thus is a very good construction material to be used.

Every input and process of Superlite AAC Blocks’ manufacture is 100% environment friendly. We are proud members of Indian Green Building Council.

Microscopic structure of lightweight blocks does not allow for capillary action, making it impervious to water penetration.

In case of red bricks, fertile top soil is used exploiting the utility of fertile land. However in case of AAC Blocks, we use Fly Ash i.e. an industrial waste and river sand.

-Saving in Steel & concrete:reinforcement up to 20%: Due to its light weight feature the dead load of the building is drastically reduced if AAC Blocks are used and hence the need for steel reinforcement is reduced drastically up to 20% as compared in case of red bricks to the tune of approx.

-Saving in Mortar Usage: Due to the massive size of AAC Blocks as compared to red bricks, the no. of joints is reduced by 65% and hence the usage of mortar is reduced by 60%.

-Saving in Plaster Usage: AAC blocks comes in precise and accurate dimensions un like red bricks and so  the blocks after installation offers you a wall without any undulation. So a thin 10  mm layer of plaster is sufficient to plaster the wall. This saves the plastering cost by 35%.

-Faster Construction: AAC Blocks due to its 7 times bigger size than red bricks ,the ease of laying with 1/3 no. of joints ,precise dimensions and no curing requirement ,offers time saving up to 30%.And so you see your project completed within a much shorter time frame as compared to red bricks.

-Saving in financing cost: Money borrowed/invested in a project has its financing cost or opportunity cost. The sooner the project completes the sooner it becomes ready to yield utility and it saves your financial cost i.e. interest charges.

-Saving in Man-hours (Labor): Man-hours is a substantial cost for construction. AAC Blocks due to its 7 times bigger size than red bricks ,the ease of laying with 1/3 no. of joints ,precise dimensions and no curing requirement ,offers time saving i.e. labor charges of up to 40%.

-Saving in cost of undercoat and top coats

The requirement of undercoats is highly dependent on the kind of smoothness of the wall installed. The wall that is made of AAC Blocks offers you highly smoother wall as compared to that of red bricks and hence the wall does not require undercoat such as putty/pop .

AAC is a lightweight cellular material which is formed by a chemical reaction between finely divided calcareous and siliceous materials. The calcareous component is usually lime and/or cement. The siliceous component usually consists of natural or ground sand and/or industrial by-products such as slag and pulverized fuel ash (PFA), also known by fly ash. The cellular structure is achieved by either a chemical process causing aeration, or by introducing air voids by mechanical means into a slurry which contains no coarse material The aeration is caused by the addition of a small quantity of acidic aluminium paste that reacts with the alkaline lime &; cement to expand the mixture.

This reaction causes the release of hydrogen gas and the formation of tiny, finely dispersed bubbles. The hydrogen dissipates after the reaction process leaving the air filled bubbles. After mixing, the slurry is placed in a mould for curing. For products that require reinforcing, the corrosion protected steel reinforcing mesh is placed in the mould before the slurry is added. After a few hours curing the product is firm enough to be removed from the moulds and transported to a cutting machine where it is cut precisely into the required sizes. Waste material is recycled back for crushing and remixing.

Autoclaving is the final stage of curing the material under steam pressure. This takes up to 12 hours, with a pressure gradient reaching around 1.25MPa at and 190oC. Steam is cycled through successive autoclaves, reducing energy loads. The blocks, panels and lintels are removed from the autoclave and packed ready for transporting. The AAC produced has a dry density of approximately 550kg/m3, giving it a dry density approximately one-quarter the density of normal reinforced concrete.

Autoclaved Aerated Concrete (AAC), also known as Autoclaved Cellular Concrete (ACC),Autoclaved Lightweight Concrete (ALC) is a lightweight, precast, foam concrete building material invented in the mid-1920s that simultaneously provides structure, insulation, and fire – and mold- resistance and various other advantages. It is also an environment friendly product, as it is manufactured using 65-70% of sand/ fly ash (by weight). Due to its many desirable attributes, AAC Blocks has gained massive popularity in Northern, Western and Southern India with almost 80 percent of the constructions using AAC Blocks as a replacement of the traditional fried clay bricks. In the North Eastern region, it is gaining popularity since 2012 and is looking to completely replace the use of traditional fried clay bricks.

AAC was perfected in the mid-1920s by the Swedish architect and inventor Dr.Johan Axel Eriksson, working with Professor Henrik Kreuger at the Royal Institute of Technology. The process was patented in 1924. In 1929, production started in Sweden at the city of Yxhult. From “Yxhult Anghardade Gasbetong” later became the first registered building materials brand in the world: Ytong. The second major international cellular concrete Hebel brand goes back to company founder and technicians Josef Hebel from Memmingen. In 1943, the first Hebel-plant was opened in Germany.

Originally Ytong autoclaved aerated concrete in Sweden was produced with alum shale, whose combustible carbon content made it beneficial to use in the production process. Unfortunately, the slate deposits used for Ytong in Sweden also contains a very low level of natural content uranium, which makes the material give off radioactive radon gas to the building. By using new recipes, containing only Quartz sand/ Fly ash , Calcined gypsum, Lime(mineral),Cement, Water and Aluminum powder, after 1975, Ytong produced a new type of aerated concrete blocks which doesn’t contain alum slate anymore and thus the problem of radon exposure from this raw material eliminated since this time. The production of this white autoclaved aerated concrete is state of the art since those days and similar recipes are used by all producers all over the world.