Wild Cordyceps collected in Bhutan are used as medicines miracles. It is referred to as yartsa gunbu (literally meaning “summer grass, winter worm”). In Chinese it is  冬蟲夏草 and in Thai  ถั่งเช่า

Cordyceps Sinensis is a unique & exotic mushroom that grows in the high mountains of Bhutan at an elevation between 14,500 feet and 17,000 feet. Cordyceps sinensis literally means summer plant and winter insect in Tibetan. Before the rainy season begins, spores of the Cordyceps mushroom settle on the heads of caterpillars that lives underground. The fungus gets so much into the body of the caterpillars’ that it grows out through its head and drains all the energy from the insect and ultimately it dies.

Cordyceps Sinensis has a long history in Tibet Medicine and Traditional Chinese Medicine. The mushroom has been used for centuries to address and treat various health conditions and to maintain normal functions of all the body systems. To go to where the Cordyceps is, you have to travel for no less than seven days by horse, on foot, and finally by yak up to the snow line where the wild Cordyceps grows. 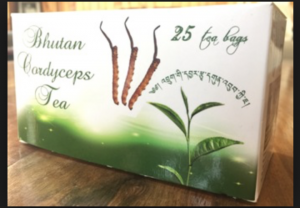 WHY BUY CORDYCEPS FROM BHUTAN?

For more details please feel free to contact us at bhutan.ent@gmail.com